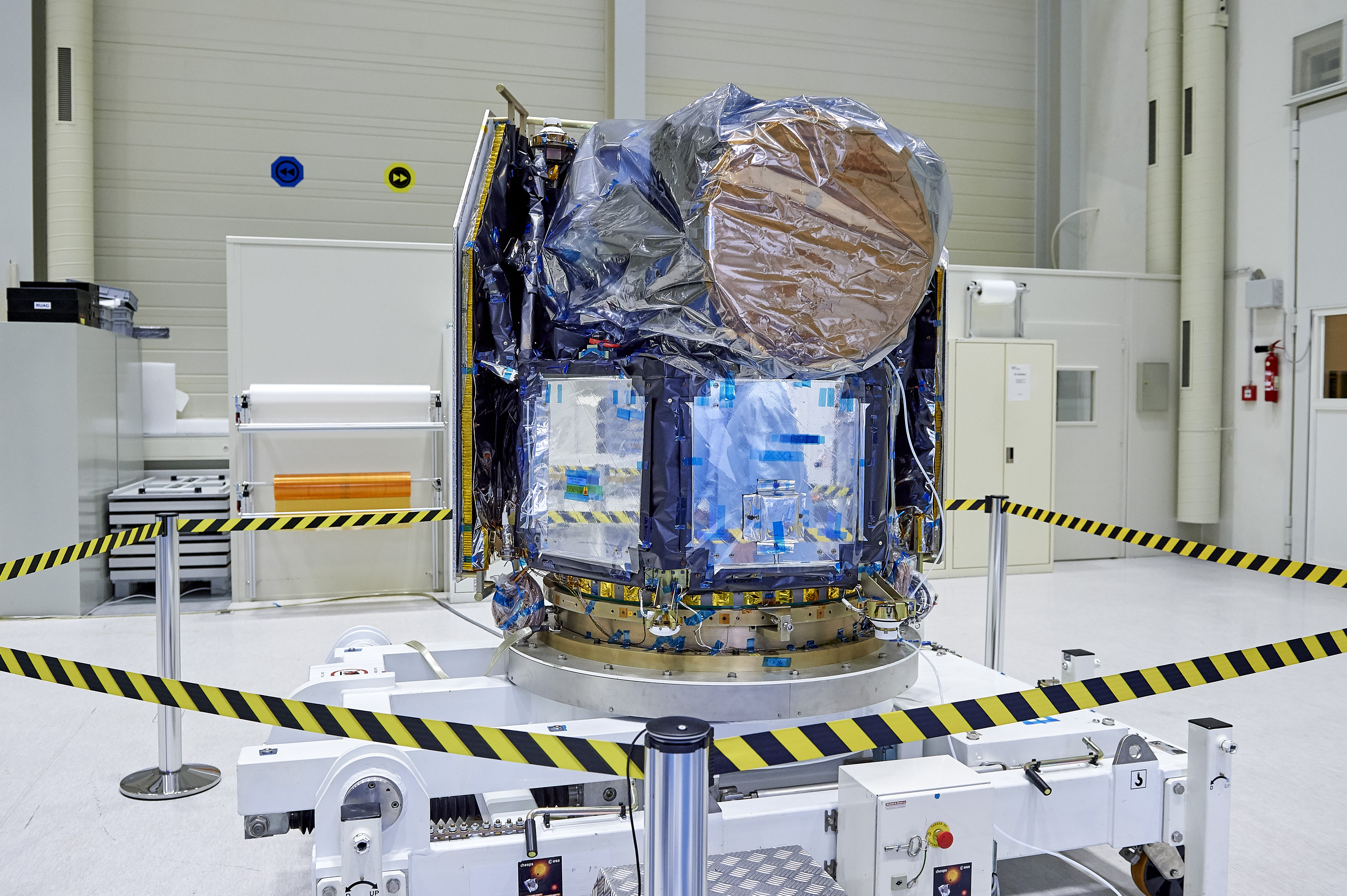 After a long tour through Europe, the CHEOPS satellite is back at Airbus Defence and Space Spain in Madrid. On its journey, it had to pass thermal-vacuum tests at Airbus facilities in Toulouse, mechanical vibration tests at RUAG Space in Zürich, and acoustic noise and electromagnetic compatibility tests at ESA’s technical centre in The Netherlands. "All tests have been completed without any major incidents," summarizes Christopher Broeg, project manager of the CHEOPS mission at the University of Bern. Now there are further tests in Madrid, in particular tank leakage must be ruled out and solar panels have to be checked after the violent shaking and acoustic exposure. Then functional system tests will follow. "The satellite should be ready by the end of the year," says Christopher Broeg. It will be kept in Madrid and sent to Kourou only 6 to 8 weeks before launch. After the vibration tests, a special event took place in Zürich: Two plaques with children’s drawings mounted on the satellite were unveiled in the presence of Swiss Federal Councilor Johann Schneider-Ammann, NCCR PlanetS Director Willy Benz and three of the more then 2700 children who contributed to the content of the plaques. What was the motivation of the children’s drawing campaign? “I wanted that people could have a physical connection with space,” says Yann Alibert, Science Officer of the NCCR PlanetS: “We have these crazy theories that men never went to the moon. So, I think it is nice that people can see concretely that something really exists, that we are working on, it will be launched and doing science.” First Alibert thought that a part of the satellite could circulate and people could touch it, but that wasn’t feasible because of the contamination. So, he had the idea of sending something with the satellite into the orbit – a drawing. In a meeting with CHEOPS Principal Investigator Willy Benz and CHEOPS Instrument Scientist Andrea Fortier he considered to launch a competition, select a winner and attach his or her work to the satellite, but in the discussion, the group pointed out major difficulties: Who would choose the winner on the basis of which criteria? “We also thought that choosing only one or two winning contributions is not very Swiss,” Alibert explains: “Why not send as many as possible, someone said, and that was what we decided.” The drawing campaign was a big success. Children from all over Europe sent imaginative contributions. 2748 drawings were miniaturized, engraved with a laser on two titanium plaques and mounted on the satellite. “With these drawings the little artists are close to something in the sky,” Alibert says, whose two daughters were eager to join the campaign. “There is one negative point,” he admits: When CHEOPS will have fulfilled its mission in a few years, the satellite will burn up in the Earth’s atmosphere and the plaques will be destroyed. “But maybe you will breathe some of the atoms,” the scientist speculates. And it will only be the miniaturized versions of the drawings that will catch fire. The originals are safely stored in the archives in a basement at the University of Bern. “Of course, there will be the science data of CHEOPS,” Alibert concludes: “But the drawings are part oft he only remains that you can physically touch and that will last once the satellite is destroyed.” (bva)