Given its overall objectives and the fact that it will be targeting stars already known to host planets, CHEOPS can be thought of as a “follow-up” mission. As the only exoplanet mission of this sort, CHEOPS is truly unique. It will search and measure transits using the best possible sample of targets: bright (close) and low activity stars. The planets observed by CHEOPS will, on the one hand, provide fundamental new insights regarding the formation and evolution of planetary systems and, on the other hand, become the prime targets for any future facility with spectroscopic capabilities.

The sparse distribution of bright dwarf stars on the sky coupled with the precision required to detect transits of small mass planets makes a systematic transit search from the ground hopeless. However over the years, a significant fraction of these bright stars have been (or will be) surveyed for planets by precision Doppler programmes. These programmes usually focus on carefully-selected samples of the quietest and brightest stars in the sky. By selection these are the old, slow rotators and therefore of stable brightness, well-suited for transit detections.

As an example, HARPS is steadily building-up a catalogue of relatively bright nearby stars hosting planets. With typical occurrence rates of about 50% for planets with masses between Neptune and the Earth (Mayor et al. 2012) in a few years many hundreds will be identified. These systems will have known planetary masses and ephemerids. Statically, a number of them will have the appropriate geometry to be transiting. For the typical stars observed by Doppler surveys (G and early K dwarfs), the transit depth is expected to be between 80 ppm and 300 ppm depending upon planet type. To detect without ambiguities such a signal on a single event, photometric performance only achievable in space are required (see Fig. 4).

In Europe, the ESO-Harps planet search monitors about 300 F, G, and K stars and 100 M stars. In the US, the Eta Earth radial velocity survey regularly monitors 250 stars (but only a fraction of them, with the adequate accuracy to find low mass planets). Assuming a conservative small mass planet occurrence rate between 20 to 50% (for orbital periods less than 60 days, see Howard et al. 2011, Mayor et al. 2012), a few hundred small planets will be known at the time of the launch of CHEOPS in 2018. With the geometrical probability of transit at 3% (0.16 AU orbit), a dozen of these planets can be expected to actually transit their star. Given that all these planets will have a precise mass determination, the number of planets orbiting bright stars for which CHEOPS will determine precise bulk densities will exceed the present known number provided by CoRoT and Kepler combined! This unique sample of small transiting planets orbiting stars V < 9 magnitude will constitute the most important target list for future detailed transit spectroscopic observations. Already today, based on the current known list of low mass RV planets, one would expect to detect > 3 with masses below 30 Earth masses in transit (see Fig. 6).

With the imminent arrival of new, dedicated planet hunting spectrographs (HARPS-N, ESPRESSO, APF), the size of the sample of identified stars hosting small mass planet will grow even more rapidly.

Hence, the list of potential targets will be large enough to ensure that CHEOPS will remain extremely efficient during its operational lifetime.

A new generation of transit surveys such as NGTS will allow the detection of Neptune-sized planets from the ground. NGTS is designed to carry out a wide-field search for transits of Neptune-size planets around bright K and early M stars, reaching 1 mmag precision on stars V < 13 magnitude. NGTS is composed of twelve telescopes of 20 cm, located at the ESO Paranal Observatory, Chile. NGTS has seen the first light on the 14th January 2015. At end of 2017, after five years of operations, about 10% of the southern sky will have been observed. This corresponds to more than 50,000 bright K dwarfs being measured with the required accuracy to detect Neptune-sized transiting planets and about 3500 stars with the required accuracy to detect a transiting super-Earths (radius < 2REarth). By extending the present day ground-based capabilities, NGTS will populate a region of the magnitude-radius diagram for which only very few detections could be made by Kepler (see Fig. 4). While detectable from the ground by NGTS, the radii of these planets will be affected by large errors. CHEOPS will enable refining these radii to a level sufficient to provide meaningful information on planet bulk structure.

Finally, Kepler has shown that, due to orbital co-alignment, about 1/3 of all stars with transiting hot Neptune-sized planets show additional smaller sized transiting bodies. CHEOPS will be ideally suited to detect these planets as well, thus providing additional insights into multi-planet systems.

The NGTS targets are not as “perfect “ as those of the Doppler program but they are bright enough to be part of the best GAIA targets. They will have a 1% error on their parallaxes and their stellar atmosphere will be easy to characterize by ground-based high-resolution spectroscopy. The density of the star will be determined well enough to reach a 10% precision on the planet radius.

Simulations of NGTS results based on Kepler and Doppler survey outcomes indicates that in 5 years of operations the following targets will be available for follow-up by CHEOPS: about 50 targets with radii in the range 1.5 to 10 REarth, as well as 22 planets in the range between super-Earth and Neptune provided that transit observations are repeated at about 4 different epochs. For some targets with even more shallow transits (planets < 1.5 REarth) transit observations at 10 different epochs will be required.

We anticipate 6 planets of that kind will be detected by NGTS on stars brighter than V < 12 magnitude. Note that the NGTS targeting scenario is flexible enough to be optimized to CHEOPS pointing capabilities. 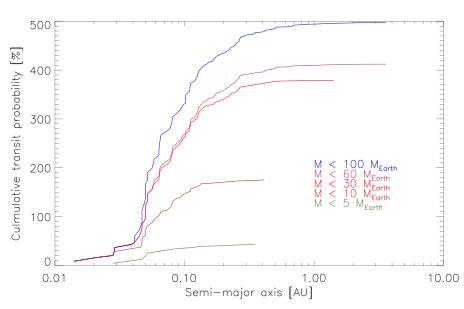 Fig. 6: Cumulative distribution of the transit occurrence based on the current list of known planet detected by Doppler surveys.