«Hello Lugano, I hear you loud and clear. Welcome aboard!» 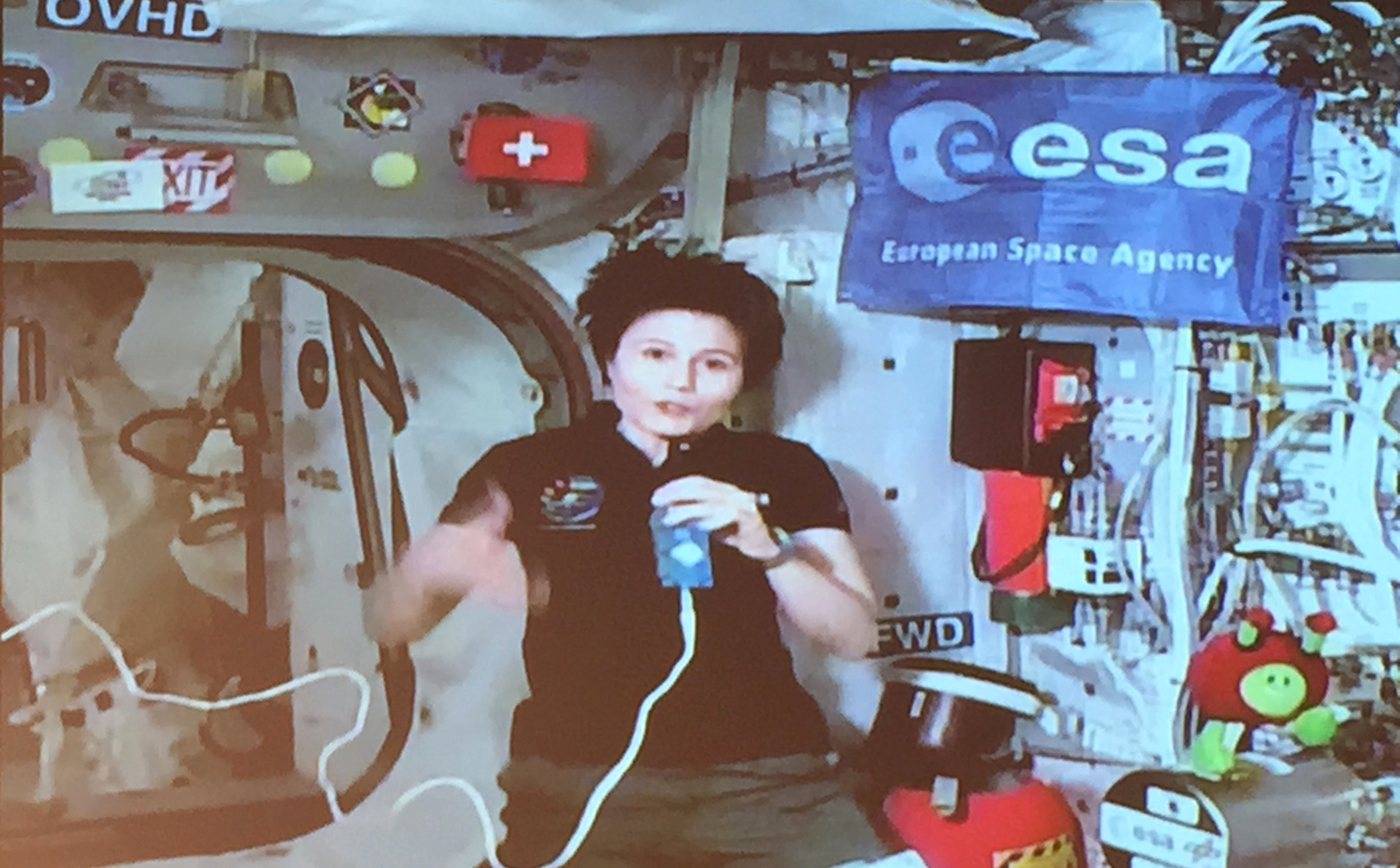 On Thursday, May 7, 150 high school students from Lugano dealt intensively with the topic space. During the event of the Swiss Space Office they listened to lectures, performed experiments, tinkered Cheops paper models – and they talked to the Italian astronaut Samantha Cristoforetti in a live link to the ISS. For some 150 high school students from Lugano it was a special day. Instead, as usual, to go to school, they came to the Liceo Lugano 2 in Savosa to deal with the topic space. The Swiss Space Office from Bern invited them. The program provided lectures, experiments and other activities.

The first lecture was held by Giordano Bruno, an engineer at the Center for Space and Habitability (CSH) of the University of Bern. He talked about the Swiss space telescope CHEOPS. Following his lecture the students started the CHEOPS competition; they had to tinker the paper model as fast as possible. After a short wile several models had been finished and were awarded. Before noon Guido Schwarz, employee communications and outreach of the NCCR Planets, talked about the Rosetta mission and let the students perform an experiment to understand the fly-by maneuvers which are used by space probes to reach other celestial bodies in the solar system. In the afternoon, shortly before 15 clock, in the hall at the Liceo it was absolutely quiet. Jules Grandsire, ESA, started the live call to the International Space Station ISS by asking: «This is ESA in Lugano. How do you hear me?» With a slight delay Samantha Cristoforetti answered: «Hello Lugano, I hear you loud and clear. Welcome aboard!»

After a brief conversation between the Italian ESA astronaut and Mauro Dell'Ambrogio, the State Secretary for Education, Research and Innovation, eight high school students had the opportunity to talk to the astronaut and ask questions. One of them wanted to know how the absence of gravity affects the taste of food, especially the coffee. With a smile Samantha Cristoforetti said: «The taste is great, because recently we have received a new espresso machine aboard the ISS. And this is of course no comparison to the instant coffee, which we consumed before.» After nearly 20 minutes, the Q & A session was over and the connection to the space station was interrupted. The astronaut had to go back to work high above the ground while the students in Lugano itself, enriched with impressive memories, again turned to their earthly duties. Access the video post of Radiotelevisione svizzera.

From left: Mauro Dell'Ambrogio, State Secretary for Education, Research and Innovation, talked to the students. The participants tried the fly-by experiment. Some students were very fast in tinkering the CHEOPS paper model. (Text and photos: Guido Schwarz)