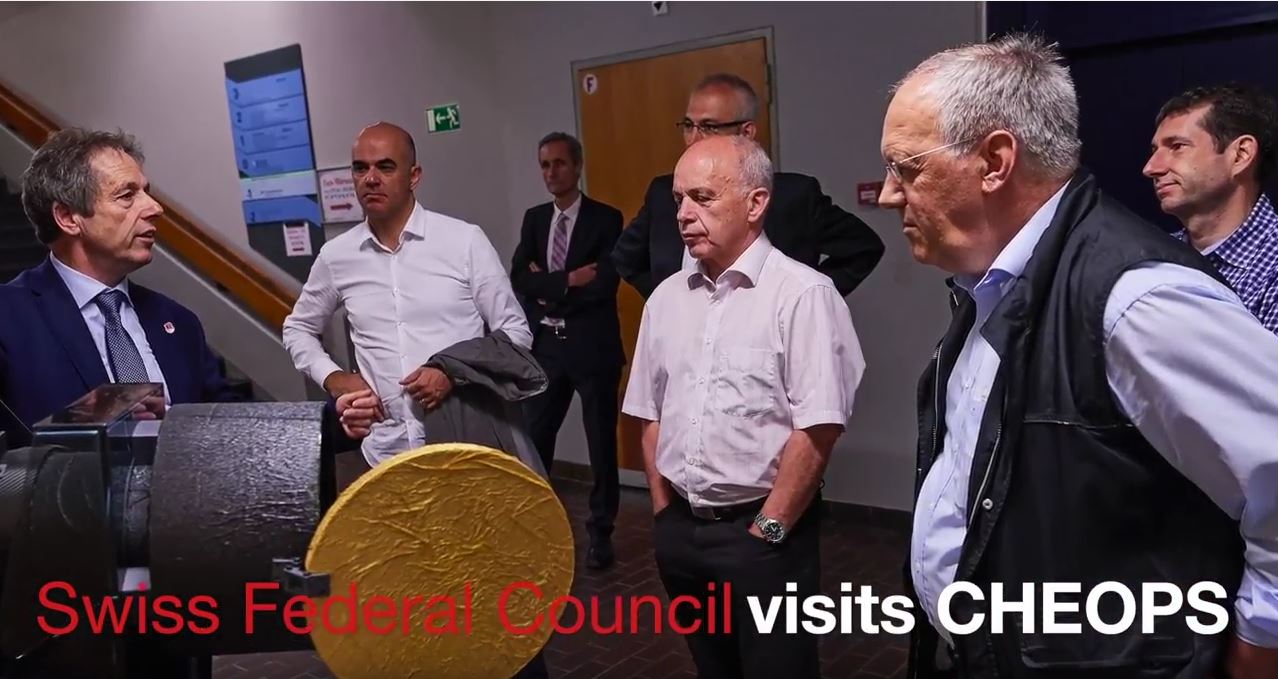 All seven members of the Swiss Federal Council paid the Center for Space and Habitability of the University of Bern a visit. They were informed about the important role the university plays in space projects such as CHEOPS. To kick off its annual “school trip” on July 7th, 2016, the Swiss Federal Council visited the University of Bern. Professor Willy Benz illustrated the important role of the University in international space research: “Here we treat the fundamental questions of mankind,” he said: “How did the Solar System arise? Is the Earth unique? Is there life elsewhere in the Universe?” After the introductory talk, the CHEOPS (CHaracterizing ExOPlanet Satellite) labor, which may only be entered wearing protective gear, was of significant interest. In this clean room, employees of CSH assemble the CHEOPS telescope and test it for its suitability for space in a five and a half tones calibration and vacuum chamber. A person could comfortably sit in the three meter-long and two-meter high cylinder. Considering its size and complexity, this test chamber is unique in Switzerland. It is also the first time that Switzerland is responsible not only for an instrument or parts of it, but for an entire mission, together with the European Space Agency (ESA). The lead of the mission is in the hands of Benz. “The project team is working at top speed”, he says, “The launch of the satellite is scheduled for 2018.” From then on, the space telescope should explore so-called Exo-Planets – “and may be bring us a bit closer to the long-term goal of finding an Earth-like planet.” Before the Federal Councilors, Chancellor and vice Chancellors continued their school trip, the polytechnician apprentices handed them on models of the space telescope CHEOPS as a farewell gift. They manufactured the detailed scale 1:20 models themselves. President Johann Schneider-Ammann thanked the employees of the university for their hospitality and the exciting insights into their work. He concluded, “I am proud of the achievements of the University of Bern!” https://youtu.be/NYsFOgUnX3s