The history of CHEOPS 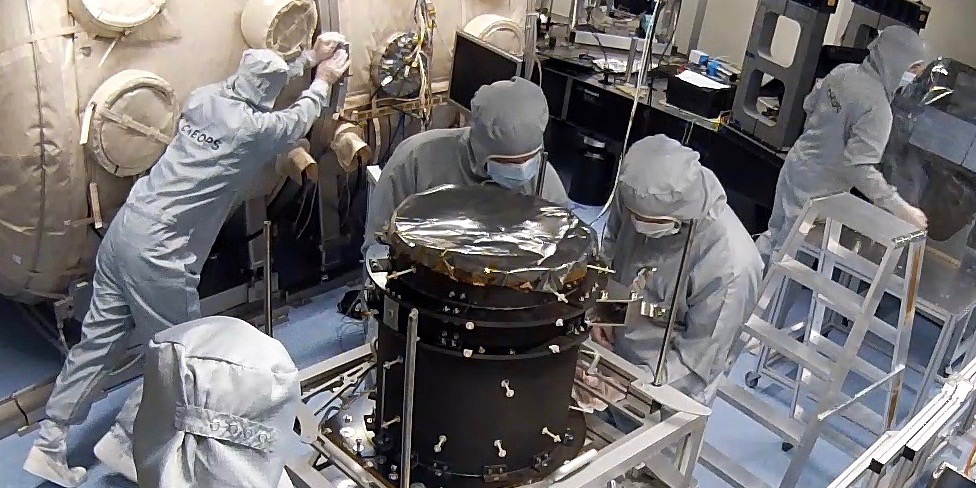 Engineers at the University of Bern are developing the CHEOPS space telescope. From Earth´s orbit, this telescope is supposed to measure the diameter of exoplanets which are light-years away from us and pass in front of their host star. Swiss astronomers had the idea for CHEOPS back in 2008. [caption id="attachment_8349" align="alignright" width="700"][

]1 Testing CHEOPS in the thermal vacuum chamber at the University of Bern. (Photo UniBern)[/caption] Willy Benz, professor at the Physics Institute at the University of Bern, actually wanted to travel during a semester-long sabbatical in 2008. Instead of spending this sabbatical at foreign universities, the astrophysicist sat at his desk at home and worked on a research proposal. The Swiss National Science Foundation had announced that they would be appointing new National Centres of Competence in Research (NCCR) and Willy Benz wanted to submit a proposal for planetary research together with his colleague in Geneva, Didier Queloz. In 1995 the former doctoral student Queloz and his supervising professor Michel Mayor discovered the first exoplanet orbiting a sun-like star. Benz also received his doctorate from Mayor at the University of Geneva nine years earlier. Already in 2000, Benz submitted a proposal for a National Centre of Competence in Research on exoplanetary research to the National Science Foundation, but his proposal was rejected. “That's science fiction, they told me in an interview back then," recalls the astrophysicist. In the year 2000, dozens of exoplanets had already been identified, in 2008 there were 300, today there are more than 3,000. The first of these distant planets orbiting sun-like stars were discovered by astronomers who were able to demonstrate that the host stars move periodically towards and away from us because both star and planet rotate around their common centre of mass under the influence of gravity. This technique is called the radial velocity method. It works well with bright stars (at least 11 mag) and provides measurements to calculate the mass of the planet. Soon astronomers also used a second method: If a planet passes directly in front of its star, it causes a kind of mini-eclipse; the brightness of the star periodically decreases by a tiny fraction. Thanks to these so-called transits, the diameter of the planet can be determined. The French satellite COROT, which was launched in 2006, and later NASA's Kepler mission, used the transit method with great success. Progress thanks to new instruments “In the field of astrophysics today, progress is mostly made thanks to new instruments," explains Benz. "When we worked on our second NCCR proposal in 2008, we wanted to propose not only scientific research projects but also the construction of hardware, including a Swiss exoplanetary satellite." This satellite was supposed to be unique because of a new observation strategy. “Transit measurement is a great method," explains the expert, “but, unfortunately, it has almost only identified planets whose stars are not very bright.” Their average magnitude is only 14 to 15.  The explanation for this is that only a very small percentage of the stars are orbited by planets whose orbits lie exactly in our line of sight. If you really want to discover transits, you have to target a large number of stars. COROT and Kepler targeted about 100,000, but this was only possible because the satellites were limited to a narrow region. The bright stars, however, are spread all over the sky. “At the time, we thought it would be possible to build a small satellite that would not focus on a narrow area, but would observe bright stars everywhere in the sky, stars that are already known to possess a planet because of the radial velocity method," Benz explains. The combination of the two detection methods is particularly interesting. If the mass is known on the basis of the radial velocity and the diameter of a planet is known due to the transit, its density can be calculated. “We then know whether the planet is mainly composed of rock or gas," says Benz - a particularly important result in the context of the search for Earth-like planets. [caption id="attachment_8350" align="alignleft" width="600"][

]2 Professor Willy Benz with a 1:2 scale model of CHEOPS. (Photo Alessandro Della Bella)[/caption] In 2009, Benz and Queloz submitted their applications for a National Centre of Competence in Research, including a feasibility study for a space telescope. When searching for the name of the satellite, the astrophysicists knew that "CH" for Switzerland would come at the beginning and that the abbreviation should be catchy. This is how they came up with "CH ExOPlanet Satellite" or CHEOPS for short. The application for planetary research was one of 13 projects that the National Science Foundation rated as excellent with a grade of A. “Unfortunately, the project was not chosen in the end," Benz says, "I was very disappointed, having sacrificed my entire sabbatical.” Persistence pays off The astrophysicist did not give up and was later able to negotiate with the rector of the University of Berne and the State Secretary for Education and Research on how the dream of a Swiss satellite could still be pursued. As a result of his persistence, the federal government and RUAG financed the feasibility report as industrial representatives, and the University of Bern founded the "Center for Space and Habitability" (CSH). “In the feasibility report, we quickly realized that the satellite project alone would be too expensive for Switzerland," Benz says. Sweden and Austria, where RUAG operated its branches, were the first European partners, and others soon followed. While the Swiss were still working on the CHEOPS feasibility study, the European Space Agency (ESA) was discussing the possibility of a new satellite programme. In addition to the existing large and medium-sized (L- and M-class) missions, the smaller ESA member states in particular wanted to launch an S-class mission. The development time for these missions should not exceed four years and the cost  should not exceed a prescribed limit set by ESA. The ESA Member States agreed on an experiment and issued a first S-mission call in March 2012. As chairman of the scientific committee advising ESA, Benz was well informed about the discussions and decisions of the ESA delegates - and was prepared to participate in the call for proposals with the CHEOPS study. While most of the others had only three months to work out their proposals, the Swiss could rely on the extensive preparatory work done in the feasibility study and benefit from Benz's ‘insider’ knowledge. "I knew the objections and doubts that some ESA delegates had previously put forward, and I made sure that we went in the right direction in our proposal and, for example, prevented cost explosions.”  Although they originally wanted to use CHEOPS to observe the transits in two different wavelengths, they decided against an infrared instrument for cost reasons. [caption id="attachment_8351" align="alignright" width="700"][

]3 The CHEOPS team at the University of Bern assembles the flight model in the clean room. (Photo PlanetS)[/caption] No holiday plans In June 2012, Benz submitted the proposal for the CHEOPS mission, now called ‘CHaracterizing ExOPlanets Satellite’. It was one of 26 proposed projects submitted. When the ESA Scientific Panel met in Madrid in October 2012 to select the winner, Chairman Benz stayed away from the conference because of his conflict of interest and waited in his Bern office for a call from the committee's secretary. "I remember his first sentence very well," Benz says. “He said, ‘you shouldn’t make any plans for holidays in the next four years’." CHEOPS started as a joint project between Switzerland and ESA. The University of Bern is responsible for the construction of the space telescope and heads the consortium of 11 ESA member states participating in the mission. The satellite platform will be built in Spain. The mission's operations centre is also located there, while the research centre is being set up at the University of Geneva. The launch is scheduled for the end of 2018 with a Soyuz rocket from Kourou. ESA will bear half of the total costs of around 100 million Euros. Switzerland will contribute around 30 million Euros, while the other partners involved will contribute the remainder of the finances needed for this undertaking. “Although we were not selected by the National Science Foundation in 2009, everything worked out very nicely in the end,” concludes Benz. "Despite the additional stress and a lot of work, we were able to start our projects and are now close to the launch!" In addition, The National Research Centre was also awarded to the planetary scientists on their third attempt. In June 2014, Willy Benz and co-director Stéphane Udry, professor at the University of Geneva, launched the NCCR PlanetS, in which the ETH Zurich and ETH Lausanne, as well as the University of Zurich are also involved. “This shows that you should never give up," says Willy Benz. (bva) For more information please visit http://cheops.unibe.ch This article was published in the magazin ORION of the Swiss Astronomical Society, August 2017.