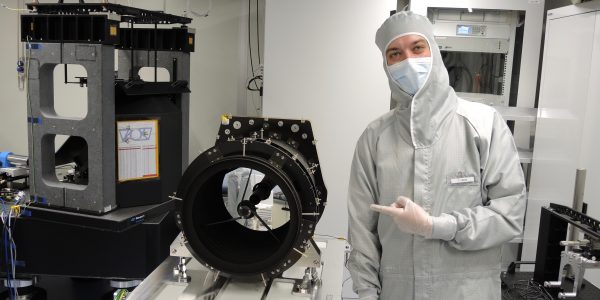 After the engineers at the University of Bern integrated and tested models of the CHEOPS space telescope, they are now working on the hardware that will actually be sent into space. In the clean room especially built for CHEOPS they are assembling the flight model of the instrument. [fusion_builder_container hundred_percent="yes" overflow="visible"][fusion_builder_row][fusion_builder_column type="1_1" background_position="left top" background_color="" border_size="" border_color="" border_style="solid" spacing="yes" background_image="" background_repeat="no-repeat" padding="" margin_top="0px" margin_bottom="0px" class="" id="" animation_type="" animation_speed="0.3" animation_direction="left" hide_on_mobile="no" center_content="no" min_height="none"][embed]http://www.youtube.com/embed/X4ba2M_YtVc[/embed] «We are proceeding well,» says Willy Benz, principal investigator of CHEOPS (Characterizing ExOPlanet Satellite): «Three of the five main elements of the telescope are already here in Bern.» They were all produced by institutes and companies in different European countries. The Baffle and Cover Assembly (BCA) was designed and manufactured in Belgium. The Baffle minimizes the stray-light, whereas the Cover prevents contamination before and during the launch. The radiators were produced in Hungary. They are needed for the thermal control by radiating the excess heat into space. After the flight models of the BCA and the radiators had arrived at the University of Bern earlier this year, the Swiss team could also welcome the proper telescope at the end of April. The primary and secondary mirror as well as the back-end optics with its two lenses were built in Italy. There, they were also integrated in the telescope structure constructed by a Swiss company. In the clean room at the University of Bern, the engineers carefully unpacked the precious cargo, conducted an incoming inspection and accomplished first tests. (See video) Soon the remaining two main parts are expected to be delivered: The instrument main computer and power converter called Back End Electronics will be sent from Austria, whereas the Detector System is constructed in Germany. It controls the CCD detector that will provide the images for the mission. In the coming months, the engineers working in the clean room have a tight schedule that doesn’t allow for lengthy summer holidays. Already in August, an important vibration test is planned that will simulate the conditions during launch. With Soyuz from Kourou «By the end of January 2018, the instrument should be essentially built, tested and calibrated,» says CHEOPS project manager Christopher Broeg. But it will take almost another year until the satellite will be shipped to Europe’s spaceport in Kourou. There, a Soyuz rocket operated by Arianespace will boost CHEOPS into space. The Swiss space telescope will share the ride with an Italian radar satellite named Cosmo-SkyMed. The Italian spacecraft is the first of a second-generation surveillance satellites designed for civil and military use. It will monitor the Earth using high-resolution X-band radars. The Cosmo-SkyMed satellite weighs almost ten times more than CHEOPS, but will orbit the Earth on a similar sun-synchronous polar orbit as the space telescope. Since launches into such orbits are quite scarce, CHEOPS is lucky to be able to team up with the Italian mission. A separate rocket launch would be too expensive for the small science mission. «Soyuz is a very reliable launcher,» says Willy Benz: «And it is even less noisy than other rockets that we had in mind when we started designing the CHEOPS instrument.» Therefore, some parts of the telescope may even be overdesigned. «It’s better that way than vice versa,» says the team leader: «So we are on the safer side.»[/fusion_builder_column][/fusion_builder_row][/fusion_builder_container]