The Universe from a Child's Perspective 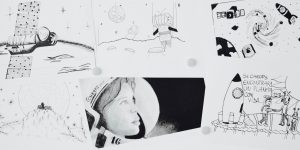 “The Universe provides ample scope to use one’s own imagination,” says Anna Lehninger.   The art historian investigates children’s drawings as a cultural asset and has had a look at the pictures resulting from the drawing campaign carried out in association with the CHEOPS mission.
In early 2019, 3000 drawings will be sent with the CHEOPS Space Telescope into space. Included among these drawings is a picture that causes Anna Lehninger to grin spontaneously. This drawing is of a robot whose head resembles an old television set. From the horizon, a friendly, alien being observes the scene.  In the sky, one can see a planet similar to Earth. “A comical picture with this puppet-like figure,” says the art historian. “Looking through the drawings I came across images in which UFOs were flying around and small men inhabited outer space again and again. These are prevalent conceptions that one can find on the Internet to which children have often added their own, inventive elements.” 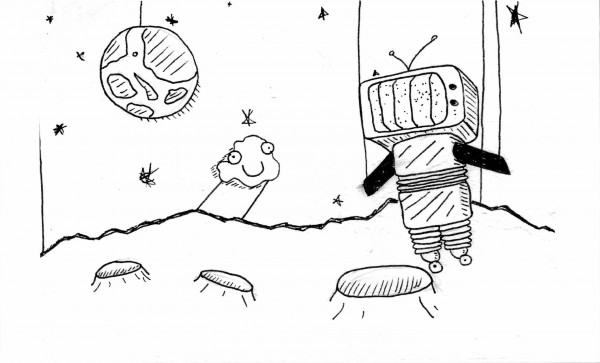 CHEOPS, short for CHaracterising ExOPlanet Satellite, is the first scientific mission of the European Space Agency under Swiss management. As part of the drawing campaign, children from Switzerland and other ESA member states have sent in thousands of images relating to the theme of the Universe. The selected works of art will be reduced in size, engraved on metal plaques and mounted on the satellite. Therefore the children had to create their images in black and white. “In the past, there have been drawing contests in which you could submit images for reproduction using only predetermined techniques,” says Anna Lehninger, who has written a book on drawing contests for children. 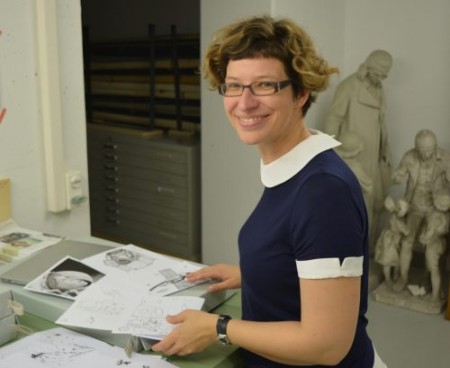 Anna Lehninger in the Archive of the Pestalozzianum Foundation in Zürich. (Photo PlanetS)

Standing in the basement of the Zurich University of teacher Education, the art historian is  surrounded by cabinets and racks which comprise one of the most extensive collections of children’s drawings in Europe. This collection is known as the Archive of Children’s Drawings of the Pestalozzianum Foundation. “The drawings are a valuable cultural asset; they show what ideas children and adolescents have been preoccupied with throughout the 20th century,” says the curator of the archive. “The topic Space was present in the 1920s and 1930s – long before space travel.” The influence of the image of Neil Armstrong on the moon with the US flag is still prevalent today: This subject can also be seen on some of the CHEOPS drawings. “The iconic image is also reinterpreted – for example, with a Swiss flag,” according to Lehninger.
Reflecting the theme Space in the media
“Based on the children’s drawings, one can easily see how the theme Space is presented in the media, especially in children’s and youth media,” says the art historian, taking stock. “We have certain ideas and images which can then be used to create our own art work.” Influences from illustrations in books and comics in particular are also clearly visible.  For example, not only do earthlings express themselves in speech bubbles, but aliens do as well. In addition to the often humorous images of a populated universe, there are also a large proportion of classical representations of the solar system with the planets. “I think this is strongly influenced by education and it is also a question of age. Older children are also interested in the scientific aspects of the subject and its representation,” says Anna Lehninger.

Even the CHEOPS Space Telescope itself is a popular subject. “Often it appears as more of a technical image, but interestingly, it also flies through the cartoon pictures,” says the expert. She could not account for differences between works of art from different countries – on the contrary: A greeting scene between earthly astronauts and aliens in space looks remarkably similar in the Spanish version and the Swiss version.  In many pictures it is obvious that space travel is treated as a unifying endeavor.
Playing with parameters
“Many aspects are similar, but some elements stick out,” says Anna Lehninger and shows the image of a beautiful, Spanish astronaut wearing a helmet with the logo CHEOPS SPACE. “One immediately thinks of current science fiction movies such as Interstellar, Gravity or The Martian – I find that very exciting.” What exactly is behind this? “Looking at such drawings, one is tempted to think of many different possibilities,” says Anna Lehninger. “But one should not read too much into this.”  Imagine if someone simply had time to sit with the artist for a portrait and the work of art itself took on an interesting form of its own. 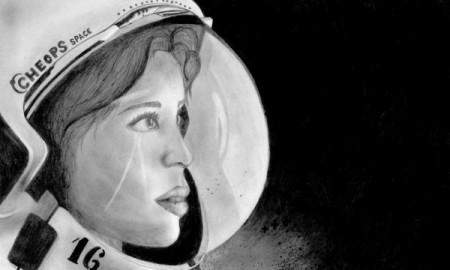 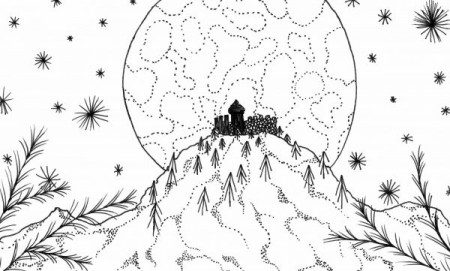 A fairytale castle on a wooded hill in front of a big disc in the sky also catches one’s eye. “This is a completely different view of Space,” says Anna Lehninger. Has the moon moved so close to Earth or we are on a distant, habitable planet? “As with all of the drawing competitions that I’ve seen so far, there is always room to play with the parameters given in the regulations on which one must orientate oneself and from which something original is produced,” says the expert. “And because one knows relatively little about the Universe, this realm provides the ideal platform to use one’s own imagination.” Whether we are dealing with funny aliens, planets and satellites drawn in minute detail or simply surprises that stand out. “There are these marvelous images to gaze upon, as well as the imagination that is incorporated into a picture,” says Anna Lehninger. “Every picture shows a different interpretation of the Universe.” (bva) CHEOPS-Drawings: http://cheops.unibe.ch/childrendrawings Anna Lehninger: Vor-Bilder. Nach-Bilder. Zeit-Bilder, Kommerzielle Zeichenwettbewerbe für Kinder in der Schweiz, 1935-1985, Chronos-Verlag, 2015, ISBN 978-3-0340-1304-8 [Archive of Children’s Drawings of the Pestalozzianum Foundation](https://phzh.ch/de/Forschung/Forschungsbibliothek-Pestalozzianum/Bestande/Archiv-der-Kinder--und-Jugendzeichnung/](https://phzh.ch/de/Forschung/Forschungsbibliothek-Pestalozzianum/Bestande/Archiv-der-Kinder--und-Jugendzeichnung/)